Learn why this can help researchers treat Alzheimer’s sooner and better.

Using high-resolution functional MRI (fMRI) imaging in patients with Alzheimer’s disease and in mouse models of the disease, Columbia University Medical Center (CUMC) researchers have clarified three fundamental issues about Alzheimer’s: where it starts, why it starts there, and how it spreads. In addition to advancing understanding of Alzheimer’s, the findings could improve early detection of the disease, when drugs may be most effective. The study was published today in the online edition of the journal Nature Neuroscience. 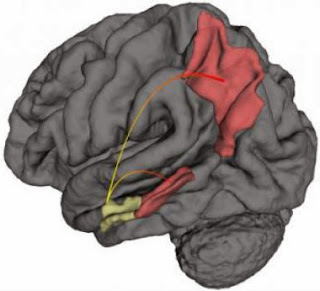 “It has been known for years that Alzheimer’s starts in a brain region known as the entorhinal cortex,” said co-senior author Scott A. Small, MD, Boris and Rose Katz Professor of Neurology, professor of radiology, and director of the Alzheimer’s Disease Research Center. “But this study is the first to show in living patients that it begins specifically in the lateral entorhinal cortex, or LEC. The LEC is considered to be a gateway to the hippocampus, which plays a key role in the consolidation of long-term memory, among other functions. If the LEC is affected, other aspects of the hippocampus will also be affected.”

The study also shows that, over time, Alzheimer’s spreads from the LEC directly to other areas of the cerebral cortex, in particular, the parietal cortex, a brain region involved in various functions, including spatial orientation and navigation. The researchers suspect that Alzheimer’s spreads “functionally,” that is, by compromising the function of neurons in the LEC, which then compromises the integrity of neurons in adjoining areas.

A third major finding of the study is that LEC dysfunction occurs when changes in tau and amyloid precursor protein (APP) co-exist. “The LEC is especially vulnerable to Alzheimer’s because it normally accumulates tau, which sensitizes the LEC to the accumulation of APP. Together, these two proteins damage neurons in the LEC, setting the stage for Alzheimer’s,” said co-senior author Karen E. Duff, PhD, professor of pathology and cell biology (in psychiatry and in the Taub Institute for Research on Alzheimer’s Disease and the Aging Brain) at CUMC and at the New York State Psychiatric Institute.

In the study, the researchers used a high-resolution variant of fMRI to map metabolic defects in the brains of 96 adults enrolled in the Washington Heights-Inwood Columbia Aging Project (WHICAP). All of the adults were free of dementia at the time of enrollment.

“Dr. Richard Mayeux’s WHICAP study enables us to follow a large group of healthy elderly individuals, some of whom have gone on to develop Alzheimer’s disease,” said Dr. Small. “This study has given us a unique opportunity to image and characterize patients with Alzheimer’s in its earliest, preclinical stage.”

The 96 adults were followed for an average of 3.5 years, at which time 12 individuals were found to have progressed to mild Alzheimer’s disease. An analysis of the baseline fMRI images of those 12 individuals found significant decreases in cerebral blood volume (CBV) — a measure of metabolic activity — in the LEC compared with that of the 84 adults who were free of dementia.

A second part of the study addressed the role of tau and APP in LEC dysfunction. While previous studies have suggested that entorhinal cortex dysfunction is associated with both tau and APP abnormalities, it was not known how these proteins interact to drive this dysfunction, particularly in preclinical Alzheimer’s.

The study has implications for both research and treatment. “Now that we’ve pinpointed where Alzheimer’s starts, and shown that those changes are observable using fMRI, we may be able to detect Alzheimer’s at its earliest preclinical stage, when the disease might be more treatable and before it spreads to other brain regions,” said Dr. Small. In addition, say the researchers, the new imaging method could be used to assess the efficacy of promising Alzheimer’s drugs during the disease’s early stages.